It is basically to strengthen the power of the engines and propellers, to hope to be stronger than the complex and poorly understood effects of wind near the ground.

In flight, the lift of the airship is equal or very close to its weight. It is for this reason that the apparatus is abused near the ground in the wind: the wind lifts it too easily and prevents it from landing. The lift variation is to compress a portion of the helium in pressurized tanks on board. The airship becomes « heavier than air » and its weight pins it to the ground.

The goal is still to be « heavier than air » while taking off and during flight. When it has a velocity relative to the air, the airship noses up so as to create a « dynamic » lift complementary to the « static » helium lift. When he takes off and when it lands, propellers provide the additional lift needed.

The envelope shape is asymmetrical between the up and down. The top is curved while the bottom is less and close to a flat surface. This asymmetry makes that close to the ground, the wind pins the device to the ground instead of lifting it.

Airships in the world today

Since 1995, many new innovative projects are launched for tourism development and loads transportation. 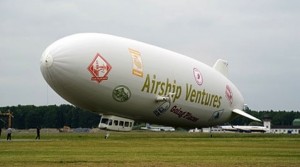 2001 : development of the Zeppelin NT in Germany. It is the only device performing commercial flights today.

In 2013 a dozen airships fly in the world. Zeppelin NT only has a profitable commercial operation in Friedrichshafen. The airship reached an availability of approximately 66%, higher than all other existing or existed airships . But this unparalleled uptime has not allowed this device to be commercially successful: only six units have been sold since 2001.

The airship has been recognized as a means of transportation for the future by various recent studies of markets.

For twenty years, significant innovation efforts have been made to find ways to improve the low operational availability of airships, the main obstacle to its exploitation. Five countries, France, USA, Great Britain, Germany and Russia have seen, in twenty years, thirty innovative projects.

In France, the creation in 1998 of Class 5 ULM allowed eight researchers / individual entrepreneurs, passionate about the issue of airship, to achieve a manned prototype with a major innovation.

French legislation makes it possible for these approved ULM to fly under the sole responsibility of the manufacturer, without the need for certification or approval by state agencies.

None of these eight projects, however, resulted in an industrial or commercial application.